Innovative ionized calcium therapy destroys cancer cells by re-activating muted gene responsible for apoptosis or cell self-destruction.  In normal cells, P53 gene triggers cell death when a cell is damaged or aging, allowing new healthy cells to replace it.  However, many cancer cells mass produce NF-kB protein which interferes with the function of P53 gene and turns off apoptosis, causing damaged cells to continue dividing and multiplying. NF-kB is produced in cytoplasm, and then translocated into the  nucleus and binds to P53 gene, inhibiting its original functions.

Calcium ions, once introduced into cancer cells, inhibits NF-kB’s effect on P53 gene and therefore restores the function of self-destruction. Cancer cells have only 1% of calcium ions of healthy normal cells, linking wide spread calcium deficiency in America to rise of occurrence of cancer for further studies. 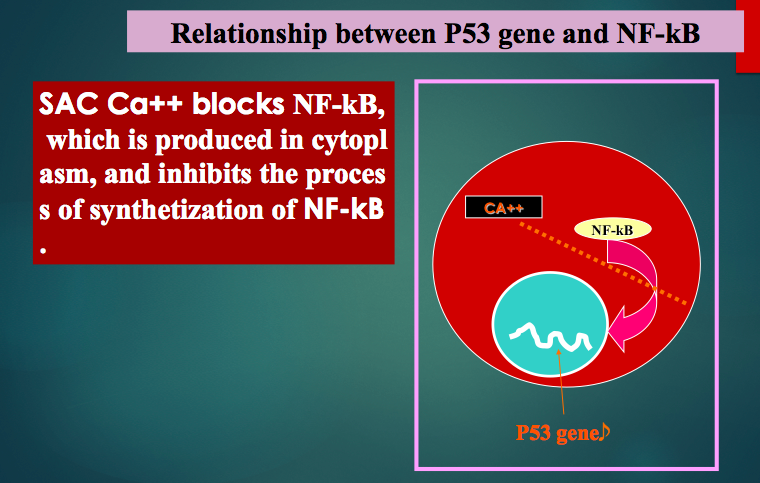 Cancer cells are highly acidic, having pH level of about 4.5.  Having enough glucose and not enough oxygen, glucose in cancer cells accumulates as lactic acid through anaerobic glycolysis, also known as fermentation, making cancer cells acidic. Lactic acid produced provides cancer with ideal thriving environment in which to grow and spread. 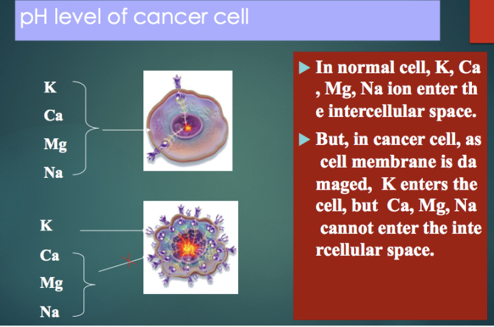 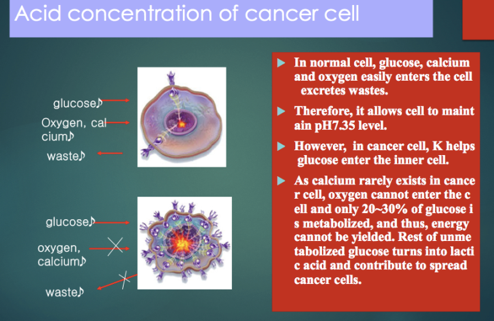 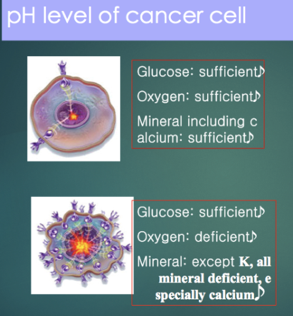 In battling cancer, it is important to eliminate the environment that first caused or nurtured cancer cells.  Studies have shown that blood oxygen level of patients with cancer is much lower than that of healthy people. Also, a Nobel prize winner (Otto Warburg, 1883-1970) found that depriving a cell 35% of its oxygen for 48 hours made it cancerous.

How then is our body deprived of essential oxygen?  Blood is responsible for oxygen supply, and there is optimum oxygen supply when blood pH is between 7.3 and 7.4. Slightly low blood pH significantly affects the amount of blood hemoglobin can carry, and it is calcium ions that control pH.

Calcium ions Assault Cancer both Within and without

When popular therapies focus on destroying cancer cells from outside, calcium ion therapy destroys cancer cells both within and without by restoring our body’s natural process for eliminating damaged cells and by eliminating the environment cancer favors.

Pronuvia’s new innovative SAC transport system delivers calcium ions directly into our blood vessels and carries it to every parts of our body affected by cancer, even where chemotherapy has difficuldty reaching.

Pronuvia’s SAC Calcium has passive transport movement and moves calcium ions to blood through linings of our digestive system. Calcium ions are the only physiologically active calcium that reacts with genes, stem celsl, hormones, and enzymes, etc.

Regular calcium supplements have active transport movement that can only be obsorbed with the help of vitamin D and peptide.  Such calcium ends up as protein-bound calcium and is not pysiologically active and thus not much useful.